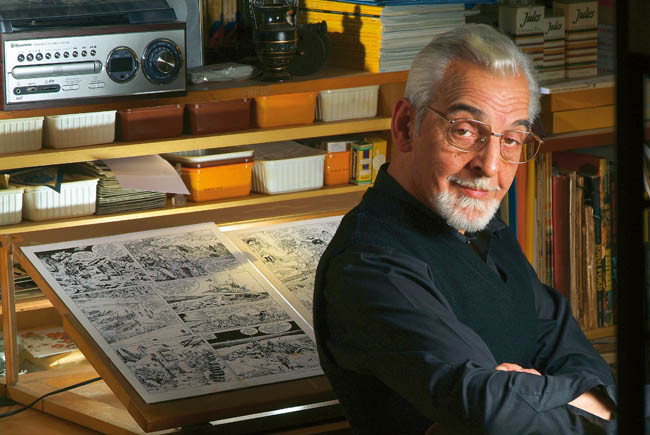 Julio Radilović, a.k.a Jules, was born 25 September 1928 in the Slovenian city of Maribor, but has lived in Zagreb since 1939. He began his career in 1952, making the comic ‘Neznanac’ for Horizontov Zabavnik. A couple of years later, he began working for the German market, where he teamed up with writer Zvonimir Furtinger to make a series about inventions and discoveries (‘Izumi i Otkrića’) for Kunterbunt, a publication by Rolf Kauka. Jules and Furtiner also created the historical comic ‘Kroz Minula Stoljeća’, that ran in the Yugoslav magazine Plavi Vjesnik until 1959.

In the early 1960s, Jules illustrated four episodes of ‘Kapetan Leši’, a series based on a Yugoslav movie about an Albanian war hero. In 1962, he adapted the Edgar Wallace novel ‘Sanders of Africa’ to comics, again in cooperation with Furtinger. The Radilović-Furtinger tandem also started the detective parody ‘Herlock Sholmes’, probably Jules’ most popular series globally. It was launched in 1957 as a pilot episode titled ‘The Amazing Adventures of Sherlock Holmes: Nana Sahib’, but became a permanent fixture of Plavi Vjesnik magazine only in 1966, where it ran successfully until 1972.
Then one episode was made for the Sarajevo Strip Art (1972/73), and the last one for the American Cartoonist’s Profile (in 1974). The first foreign reprint (with the change of the main hero’s name to Herlock Sholmes due to the famous detective’s name being copyrighted) was published by the British publisher Fleetway Publications in their weekly Giggle (1967), followed by the release in Din Dan by the Spanish Bruger (1974), Aventures & Voyages (France, 1976), O seculo (Portugal, 1976), Folha da tarde (Brazil, 1976), Gruner & Jahr (Germany, 1977), The Times of India (India, 1983).

Jules joined the Strip Features Syndicate through which he worked on series like ‘Baca Izviđač’, ‘Afričke Pustolovine’ and ‘Jaimee McPheeters’, published in magazines like Plavi Vjesnik and Studio (scripts by Furtinger or Norbert Neugebauer). During this period, he also illustrated a great number of book covers and advertisements. In 1977, he started the World War II series ‘De Partizanen’ (‘The Partisans’) with scriptwriter Đorđe Lebović for the Dutch magazine Eppo. Although Radilović and Lebović never met in person, they continued their collaboration on the strip until 1989.

Jules has had many solo and joint exhibitions, and presented his work at international comic festivals and salons in Rapallo, Lucca, Gijon, Genova, Angouleme, Zaandvoort, Breda, Ajaccio, Szigetvar, Naples and Paris. He was also the president of the union of Yugoslav comic artists. He is the recepient of many awards. In 1987, he was awarded the Pulcinella Prize for participation at the 8th Salon of Comics in Naples and in 1996 at the 6th Salon of Comics in Vinkovci he received the Lifetime Achievement Award. He was awarded for his achievements in the field with the Danica, the highest Croatian national decoration.

Jules was included in Maurice Horn’s World Encyclopedia of Comics (the latest, 1999 edition), as one of the few Croatian comic artists to be included in it, as well as in several Yugoslav and Croatian fine art encyclopedias and lexicons.